This fully form-fillable, booklet size Play Kit in was designed for use with Dungeon World.

Two Play Kit versions are included (each containing a Moves Reference, Playbooks and GM Reference): one that adheres as closely as possible to the original Dungeon World material, as well as an Enhanced version including many community improvements, such as Flags (replaces Bonds), Drives (replaces Alignment) and Travel, Severe Weather and Follower moves from The Perilous Wilds. All Playbooks from the original Play Kit were added, and the Enhanced version features the Perilous Wilds variant of The Ranger. Form-fillable playbook templates are included too. The GM Reference contains an additional section with fantasy names to choose from. The Enhanced version also contains templates for Followers, designed for use with The Perilous Wilds. All Compendium Classes from Dungeon World and The Perilous Wilds, as well as a form-fillable template are included in a separate PDF file. The Extra file contains a Class Warfare playbook template, as well as many Example Flags.

The A5 or half-letter-sized pages (separate PDF files are included) of both Play Kit versions are designed to be individually printed as booklets on A4 or letter-sized paper, respectively; each section spans exactly 4 pages. All other material, such as the Compendium Classes, should be printed single-sided, two pages per sheet. Each PDF file also contains Background and Illustrations (if any) layers that can be hidden for environmentally friendly printing. Normal (non-fillable), form-fillable and print friendly versions of each file are included as well.

You can download the Dungeon World Play Kit from DriveThruRPG.com. 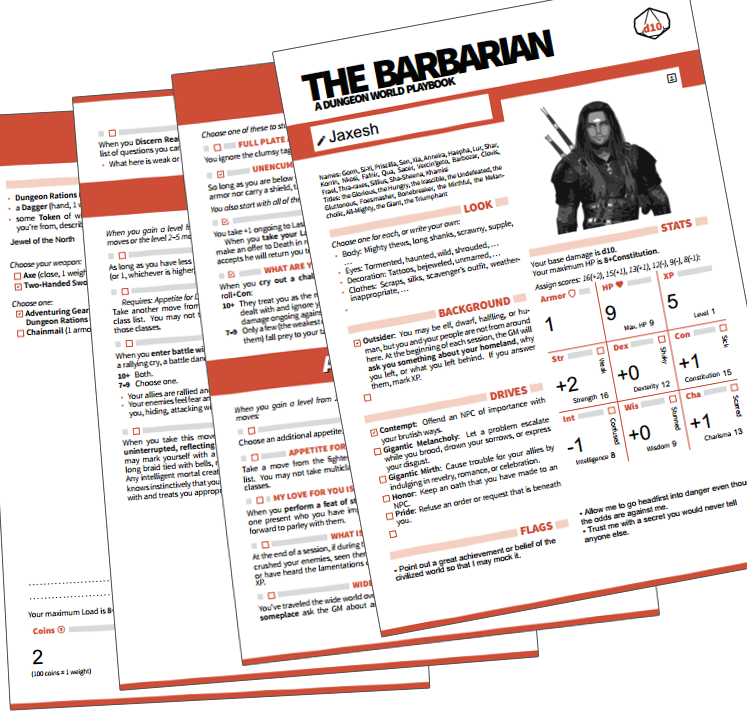