Resistors are color-coded and have at least two value bands and a multiplier; other bands are optional. To distinguish left from right there often is a gap after the multiplier band 1. 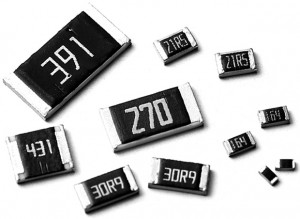 However, making matters confusing, there’s a new coding system for SM resistors using a 2-digit code in combination with a multiplier letter. To decipher these, you’ll need the lookup tables below.