As already mentioned briefly in this post about my Arduino Starter Kit, most of the Arduino boards come with AVR controllers (a microcontroller of the Atmel family), e.g. an ATmega328P-PU. However, when there’s no need for all the inputs and outputs on your Arduino and you really want to miniaturize your project, you can use an Atmel tinyAVR microcontroller instead, such as an ATtiny45 (datasheet) or ATtiny85 (datasheet). These are small, very cheap microcontrollers that are convenient for running smaller programs. This way you can replace your ‘bulky’ Arduino Uno by this tiny package.

Among some of the differences, note the following:

For this article, you’ll need:

First you need to install support for ATtiny boards in your Arduino IDE. You only need to do this once:

You need to temporarily turn your Arduino Uno into an in-system programmer (ISP) for your ATtiny chip. Before we look at the hardware, start by uploading the necessary code to your Arduino Uno:

Connect the Arduino board to the ATtiny as shown in the diagram below: 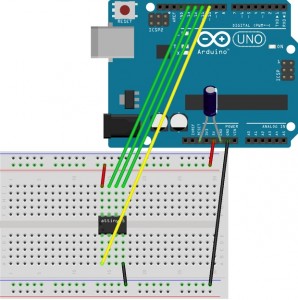 Also, connect a 10 µF capacitor between reset and ground on the Arduino Uno board as shown in the diagram. Make sure that the stripe on the capacitor that’s marked with a negative sign should go to ground.

Next, in the Arduino IDE Tools menu:

An ATtiny’s internal clock runs at 1 MHz by default. If you’d {cpp}delay(1000);{/cpp} when still running at 1 MHz, you’d notice a delay of 8 seconds instead of 1 second. That’s why you need to change this to 8 MHz by selecting Burn Bootloader from the Tools menu after setting the options above correctly. Again, make sure you have selected 8 MHz (internal). You only need to do this once for each ATtiny45/85.

That’s it! To test your setup, you can now upload the following Blink sketch with modified pin numbers to the ATtiny using your Arduino as an ISP to test it (menu Sketch » Upload using Programmer). If you would just Upload as usual, you’d be reprogramming the Arduino Uno again and that’s not what you want to do here. 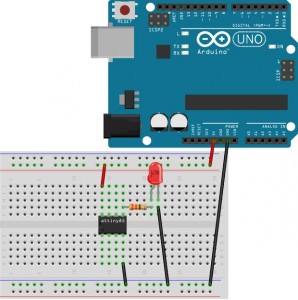 Next, remove the yellow and green cables and hook up a 330 Ω resistor and an LED to ATtiny Pin 0 instead and watch it blink.

Note that the only remaining purpose of the Arduino here is to supply power, as a 5 V voltage source, to the ATtiny45/85.

Later, we’ll explore ways to remove the Arduino altogether and use batteries to make the project portable. Also, soldering the components on a PCB adds another level of miniaturization to the project.

If you find an ATtiny85 too limited for your project but you don’t want to use an Arduino Uno, then take a look at an Arduino Pro Mini or an Adafruit Trinket.