I wanted to build a CNC router and started designing the machine in FreeCAD, a great free and open-source CAD application. Note that the design shown above is not yet finished, but already clearly shows the way I wanted to go, weighing cost versus stability.

When designing the frame, I quickly realized the huge amount of choices presenting itself: 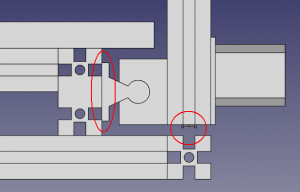 I decided to build the frame primarily with 30×60 aluminum profiles because those offer slots spaced exactly where the rails can be mounted with T-slot inserts (as indicated on the image, showing the right rail of the Y axis, viewed from the front)—I wanted a design that was as easy to build as possible without the need for too much extra drilling. Note that the slots in the aluminum profiles are simplified as square slots to make the FreeCAD models less complex to work with. After several tries to be able to mount the guide rails upright, I decided to mount them sideways 1 in order to solve the next problem: I wanted the belt to be tucked away in a slot (as shown on the right side of the image, where the bearings are sticking out at the bottom) and couldn’t figure out an easy way to accomplish this with the guide rails upright without making the design a lot bulkier. Hiding the guide rails under the table also prevents dirt and pieces of wood/metal to land on the rails—when the sliding carriage rides over this, it would probably damage them. 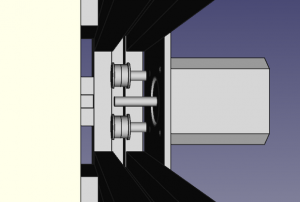 For driving the GT2 belt with the motors, I decided to use the same method the X-Carve uses (as shown in the image on the right, viewed from the top, between the two beams of the gantry mounted to the sliding carriages) to be able to have the GT2 pulley (not shown) on the stepper motor shaft make contact with as many teeth of the belt as possible. This approach also allows the motor to be mounted higher up on the side of the gantry.

Then, the last weekend of November 2015, Inventables had a sale and offered a $100 discount on the X-Carve. Because I didn’t believe in my ability to actually pull off building my own CNC router from scratch like this—or at least not within an acceptable time span—I hesitated and then ordered the X-Carve Core Components, 500mm Rail Kit and Acme Lead Screw Kit for $298 plus an additional $80 for shipping to Belgium. That’s without a waste board, stepper motors, spindle, controller, power supply, wiring, drag chain nor any of the accessories in order to keep the shipping costs as low as possible. I ordered only the parts that are hard to get in Belgium and would look for the rest elsewhere. I’m glad I did, because I was required to pay an additional $112 import tax, customs clearance fees and whatnot at the post office! I justified the unexpected cost as if I bought it without the $100 discount. So to any of you interesting in buying the X-Carve and living in Europe, beware of the additional fees!

However, having researched all this stuff about CNC routers was very useful and I don’t regret the hours spent doing so. And by getting a design that ‘works’ as already proven by the community, reduces the risk of me messing that up at least. Too bad I had to give up the idea of guide rails. In a distant future, when I’m more confident about me being actually able to build this, I might actually continue with this design.

In the next post, I’ll go over the X-Carve assembly, customizations and additional parts I bought to complete the mechanical part of the project, before venturing of into the software part and finally discussing the whole tool chain from designing a part (CAD) to planning tool paths (CAM), possibly doing some post-processing and simulations, before finally having the controller execute G-Codes on the CNC router. There’s a lot more to discuss…